Addressing senior military commanders at a joint command course at the Zimbabwe Staff College in Harare yesterday, Cde Mutasa said the rationale behind the imposition of economic sanctions was to reduce the capacity of the country to survive within the context of a fully integrated international economic system.

Some of the commanders were drawn from Sadc member states. "A degraded economic environment is being marketed as Zanu-PF's inability to govern, thus justifying regime change," said Cde Mutasa. He said the West was equally angling for economically driven socio-political discontent that would lead to mass protests and riots as a precursor to illegal regime change. Such disturbances, he said, would be covered by the international media as reflecting a "state of ungovernability" in Zimbabwe. "The 'crisis' would then be referred to the UN Security Council with a view to imposing mandatory UN sanctions against Harare or conducting a UN sanctioned invasion to effect regime change.

"The MDC would be expected to preside over the process of restoring white economic hegemony and privilege," he said. Cde Mutasa said MDC legislator for Chitungwiza Mr Fidelis Mhashu is on record confirming the MDC position that if elected to power, they would return land to white farmers. He said national security had remained central in the political and economic life of independent Zimbabwe. "This is precisely because Government has remained loyal to the fundamental and liberation war driven objectives of offering economic security to its own citizens.

"Availing land and mineral wealth are key to enhancing human security. However, the goal of enhancing the economic security of Zimbabweans is being bitterly contested by the Western world led by the British government," Cde Mutasa said. He said the Western countries had consistently identified "anti-liberation" forces and individuals whom they have used in attempts to resist African efforts at self-interpretation.

He said these anti-people efforts had failed consistently over the decades.

"African governments have seen through Western machinations and have refused to embrace anti-liberation forces. The support accorded Zimbabwe at the Sadc Summit in Dar-es-Salaam (Tanzania) should be seen in this context," he said. He said persistent global anti-Government propaganda by the powerful media houses and the economic sanctions were two potent modern weapons being used to undermine Government and Zanu-PF's grip on power. He said the economic "misery" that was being driven by illegal sanctions and the negative publicity would fail to undermine the resolve of Zimbabweans to defend the land issue. "As Government, we draw comfort from the fact that our security establishment has remained resolute in the defence of the fatherland against these external threats," he said.

Cde Mutasa said Zimbabwe offered a good case study of the contemporary methods being used by powerful states to threaten the existence of smaller states. He said the other was direct military invasion as in Afghanistan and Iraq where there were undeclared economic sanctions backed up by sustained propaganda by a powerful international media were tools, which were now deployed to great effect. "Additionally, we have noted that the cyber space is now utilised to mount a sustained attack on a target country," he said.

He said the land issue lies at the root of current efforts to subvert the State in Zimbabwe. The drive by Government to acquire land and distribute it to landless people had alarmed Britain, the US and the rest of the Anglo-Saxon community, he said. Cde Mutasa said this prompted the US government to pronounce that Zimbabwe "poses an unusually and extraordinary threat to the foreign policy of the United States."

"This assessment clearly suggests that Washington is alarmed and views Harare's drive for land restoration to blacks as spawning an international phenomenon where those natives around the world, who have been denied access to resources such as land in their own countries, could rise up and demand restitution."

Cde Mutasa said as an instrument to effect regime change, Britain and its allies embarked on a demonisation campaign against the Zimbabwean Government, distorting, misinforming and exaggerating events taking place in the country.

"To further the objective of demonising Government, Britain and its allies in the West have deployed short wave radio stations, namely the Dutch-sponsored Voice of the People, the British-sponsored Short Wave Radio Africa and the American-sponsored Studio 7 which daily beam anti-Zimbabwe Government propaganda into the national airwaves, inciting Zimbabweans to take up arms against their own Government and praising acts of violence perpetrated by the opposition. "The same Western countries have also sponsored the creation of a plethora of opposition aligned websites on the Internet which carry and promote the ideology of hate and division," he said. Through selective reporting, Cde Mutasa said, the international media remained blind to acts of violence perpetrated by the MDC which always acts in cahoots with some Western-sponsored NGOs and the ZCTU.

"In doing so, they only focus on the actions of the police in order to create and perpetuate the impression that the police in Zimbabwe is partisan, brutal and repressive.

"The media and cyber war waged by Britain and its allies has been relentless to the extent that the image of Zimbabwe out there is that of a country which has sunk into anarchy," he said.
Posted by Zimbabwe Image at 01:40

Zimbabwe Image
Harare, Zimbabwe
I am a Zimbabwean who grew up in one of the semi-arid, infertile and overcrowded tribal trust lands that successive White (Pink) Rhodesian racist governments had pushed Black natives into for over a century. I support the taking back of our land from these settler invaders. I support the current efforts to indegenize Zimbabwe's economy. I have no tolerance for Morgan Tsvangirai, who i am convinced is a low IQ, semi-literate, unkempt thug, with a gross inferiority complex when dealing with whites and an exaggerated slave mentality that makes him a puppet to Number 10 Downing Street and the White House. He is a stupid uncle tom who cant tell his right from his left but has been elevated by his white (Pink) masters for being willing to play 'horse and rider' games in which Zimbabwe is the horse. Nehanda's spirit medium, Gandangakadzi Charwe Nyakasikana and Mhondoro Huru Kaguvi, a spirit onto the person of Gumboreshumba, were the first leaders to spearhead the first war of resistance against European domination in Zimbabwe. The two spiritual leaders instructed all regional leaders to resist this domination in whatever way they could. Great Shona warriors emerged during this period, including Mashayamombe, Gondo, and Zhanda. Nehanda and Kaguvi were captured and murdered by European invaders under a Musasa tree still standing in a Harare street to this day. However before she was hung, Nehanda promised the invaders that her bones will rise to lead another Chimurenga struggle against them, ultimately freeing the land.
The land is today free, and Nehanda's dream has come true. Her bones have risen to fire up the final repossession of our land - a promise she made a century ago. Today we celebrate the spirit of Nehanda and Kaguvi, a spirit for freedom, resistance against enslavement, and the courage to meet fire with fire. Pamberi ne third chimurenga. Our blood gave us back our land, we will shed blood to protect it, a duty bestowed upon us by our ancestors, who we worship and revere.

Morgan Tsvangirai is a Slave 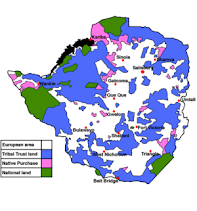 The realities of colonial dehumanisation. 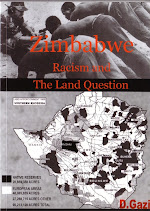 "The land is ours. It's not European and we have taken it, we have given it to the rightful people... Those of white extraction who happen to be in the country and are farming are welcome to do so, but they must do so on the basis of equality."
R.G. Mugabe

"We are a people who have a culture, a cause, an identity, priorities and a destiny we want to take our nation to."We have our own sphere, our own space, which we must self-determine and govern as a sovereign people. We will never be that image the British or Americans have put on BBC or CNN, never,"
R.G. Mugabe

Ours is a morally and legally justified position.

From then to now.